Time travel is myth or reality? Few people says it's absurd and unbelivable, few beleive in that but don't know how it's happen. But Time travel has been theoritically proven , but not practically proven.  the formula below shows that it is possible
In Mahabharat age King Raivata went to meet Brahma to consult about her daughter marriages and when he came back to earth, many ages have been passed.
If we take modern era , Many incidents about time travel world has witnessed. Let's put some light on these incidents
Rudolph fentz 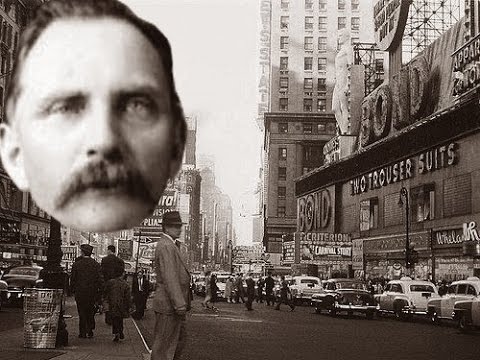 This man which was the focal character of "I'm Scared", a 1952 science fiction short story by Jack Finney, which was latter reported this was not the fiction It's true story.
Fentz legend says this men came in new york city mid june 1951 at 11:15pm, he was on the road completely disoriented puzzled he dressed fashion of late 19th century and suddenly a car hit him and he collapsed and died. later Police found in his pocket
1. Copper token for bear
2. 70 dollars old notes
3. Business card having address fifth avenue
4. Medal for running race
Andrew carlssin
This man was caught by police in case of insider tradding , as he managed to make lots of dollar within 2 weeks, police was wondering now they can grab mastermind gang who are suppporting him, but during enquiry It comes to light that this man don't belong to this time he came from future and he read the news that during this period stock prices would be very high, and he further told the police if they will give the chance he can also give the treatments of Aids and other fatal diseases. Cops were amazed and not ready to belive his words. They realased him, After that day, he was totally disappeard, no one knew where he is.
Bold street liver pool
This liver pool exist in UK where many people claim about time slips. suddenly everything get changes, people experience 1950 and 1960s era for a few moment, few say it's real but few beleive its a mass Hallucination
for more refrence you can go to https://exemplore.com/paranormal/The-Liverpool-Time-Slips-The-True-Story-Of-Mysterious-Occurences-In-Bold-Street
Conclusion
If we can travel at the speed of light then it is possible to go in future because in some research it is found that when we travel the time velocity decreases some nano seconds. likewise if we can travel 3 years continously at speed of light we can go 900 years in future.
chimniii.com